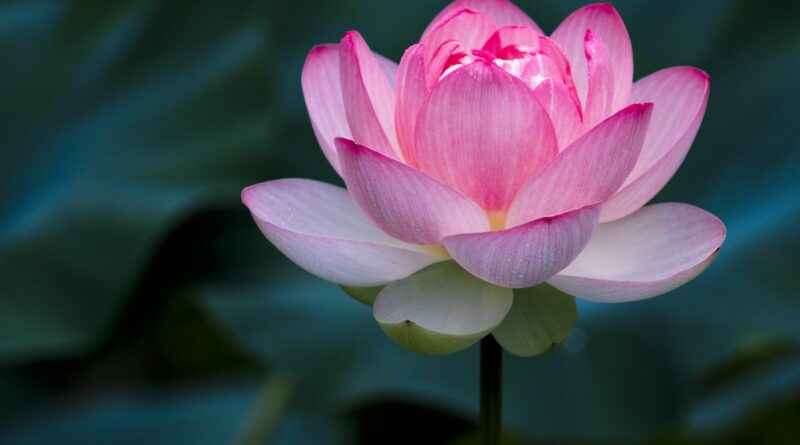 The Rewards of the Contemplative Life

“A householder or householder’s son, hearing the Dhamma, gains conviction in the Tathagata and reflects: ‘Household life is confining, a dusty path. The life gone forth is like the open air. It’s not easy living at home to practice the holy life totally perfect, totally pure, like a polished shell. Suppose I were to go forth?’

“So after some time he abandons his mass of wealth, large or small; leaves his circle of relatives, large or small; shaves off his hair and beard, puts on the saffron robes, and goes forth from the household life into homelessness.

“When he has thus gone forth, he lives restrained by the rules of the monastic code, seeing danger in the slightest faults. Consummate in his virtue, he guards the doors of his senses, is possessed of mindfulness and alertness, and is content….

“Now, how does a monk guard the doors of his senses? On seeing a form with the eye, he does not grasp at any theme or variations by which—if he were to dwell without restraint over the faculty of the eye—evil, unskillful qualities such as greed or distress might assail him. [Similarly with the ear, nose, tongue, body, and intellect.]

“And how is a monk possessed of mindfulness and alertness? When going forward and returning, he acts with alertness. When looking toward and looking away…. when bending and extending his limbs… when carrying his outer cloak, his upper robe, and his bowl… when eating, drinking, chewing, and tasting… when urinating and defecating… when walking, standing, sitting, falling asleep, waking up, talking, and remaining silent, he acts with alertness.

“And how is a monk content? Just as a bird, wherever it goes, flies with its wings as its only burden; so too is he content with a set of robes to provide for his body and alms food to provide for his hunger. Wherever he goes, he takes only his barest necessities along.

“He seeks out a secluded dwelling: a forest, the shade of a tree, a mountain, a glen, a hillside cave, a charnel ground, a jungle grove, the open air, a heap of straw. After his meal, returning from his alms round, he sits down, crosses his legs, holds his body erect, and brings mindfulness to the fore. He purifies his mind from greed, ill will, sloth and torpor, restlessness and anxiety, and uncertainty. As long as these five hindrances are not abandoned within him, he regards it as a debt, a sickness, a prison, slavery, a road through desolate country. But when these five hindrances are abandoned within him, he regards it as unindebtedness, good health, release from prison, freedom, a place of security. Seeing that they have been abandoned within him, he becomes glad, enraptured, tranquil, sensitive to pleasure. Feeling pleasure, his mind becomes concentrated.

“And furthermore, with the fading of rapture, he remains equanimous, mindful, and alert, and senses pleasure with the body. He enters and remains in the third jhana, of which the noble ones declare, ‘Equanimous and mindful, he has a pleasant abiding.’ He permeates and pervades, suffuses and fills this very body with the pleasure divested of rapture. Just as in a lotus pond, some of the lotuses, born and growing in the water, stay immersed in the water and flourish without standing up out of the water, so that they are permeated and pervaded, suffused and filled with cool water from their roots to their tips, and nothing of those lotuses would be unpervaded with cool water; even so, the monk permeates… this very body with the pleasure divested of rapture. There is nothing of his entire body unpervaded with pleasure divested of rapture. This, too, is a reward of the contemplative life, visible here and now, more excellent than the previous ones and more sublime.

“And furthermore, with the abandoning of pleasure and pain—as with the earlier disappearance of joy and distress—he enters and remains in the fourth jhana: purity of equanimity and mindfulness, neither pleasure nor pain. He sits, permeating the body with a pure, bright awareness. Just as if a man were sitting covered from head to foot with a white cloth so that there would be no part of his body to which the white cloth did not extend; even so, the monk sits, permeating the body with a pure, bright awareness. There is nothing of his entire body unpervaded by pure, bright awareness. This, too, is a reward of the contemplative life, visible here and now, more excellent than the previous ones and more sublime….

Then Ven. Assaji, arising early in the morning, taking his robe and bowl, entered Rajagaha for alms: gracious in the way he approached and departed, looked forward and behind, drew in and stretched out his arm; his eyes downcast, his every movement consummate. Sariputta the wanderer saw Ven. Assaji going for alms in Rajagaha: gracious… his eyes downcast, his every movement consummate. On seeing him, the thought occurred to him, “Surely, of those in this world who are arahants or have entered the path to arahantship, this is one. What if I were to approach him and question him: ‘On whose account have you gone forth? Who is your teacher? Of whose Dhamma do you approve?’”

But then the thought occurred to Sariputta the wanderer, “This is the wrong time to question him. He is going for alms in the town. What if I were to follow behind this monk who has found the path for those who seek it?”

Then Ven. Assaji, having gone for alms in Rajagaha, left, taking the alms he had received. Sariputta the wanderer approached him and, on arrival, exchanged courteous greetings with him. After an exchange of friendly greetings and courtesies, he stood to one side. As he was standing there he said, “Bright are your faculties, my friend, pure and clear your complexion. On whose account have you gone forth? Who is your teacher? Of whose Dhamma do you approve?”

“But what is your teacher’s teaching? What does he proclaim?”

“I am new, my friend, not long gone forth, only recently come to this doctrine and discipline. I cannot explain the doctrine in detail, but I can give you the gist in brief.”

Then Sariputta the wanderer spoke thus to the Ven. Assaji:

“Speak a little or a lot,

but tell me just the gist.

The gist is what I want.

What use is a lot of verbosity?”

Then Ven. Assaji gave this Dhamma exposition to Sariputta the wanderer:

“Whatever phenomena arise from cause:

Such is the teaching of the Tathagata,

Then to Sariputta the wanderer, as he heard this Dhamma exposition, there arose the dustless, stainless Dhamma eye: Whatever is subject to origination is all subject to cessation.

Then Mahapajapati Gotami [the first nun, and the Buddha’s foster mother] approached the Blessed One and on arrival, having bowed down, stood to one side. As she was standing there, she said, “It would be good if the Blessed One would teach me the Dhamma in brief so that I, having heard the Dhamma, might dwell alone, secluded, heedful, ardent, and resolute.”

[According to the commentaries, Mahapajapati Gotami gained arahantship soon after receiving this instruction.]

from this physical heap.

Then weak from that, aged,

She taught me the Dhamma:

I cut off my hair and ordained.

Having purified the divine eye

while still a trainee,

I know my previous lives,

where I lived in the past.

I develop the theme-less meditation:

I gain the liberation of immediacy—

through lack of clinging, unbound.

stand like a tree with its root cut through.

I spit on old age.

There is now no further becoming.

Ven. Punna: “Lord, I am going to live in the Sunaparanta country.”

The Buddha: “Punna, the Sunaparanta people are fierce. They are rough. If they insult and ridicule you, what will you think?”

“…I will think, ‘These Sunaparanta people are civilized, very civilized, in that they don’t hit me with their hands.’ That’s what I will think….”

“But if they hit you with their hands…?”

“…I will think, ‘These Sunaparanta people are civilized, very civilized, in that they don’t hit me with a clod’….”

“…I will think, ‘These Sunaparanta people are civilized, very civilized, in that they don’t hit me with a stick’….”

“…I will think, ‘These Sunaparanta people are civilized, very civilized, in that they don’t hit me with a knife’….”

“…I will think, ‘These Sunaparanta people are civilized, very civilized, in that they don’t take my life with a sharp knife’….”

“But if they take your life with a sharp knife…?”

“…I will think, ‘There are disciples of the Blessed One who—horrified, humiliated, and disgusted by the body and by life—have sought for an assassin, but here I have met my assassin without searching for him.’ That’s what I will think….”

“Good, Punna, very good. Possessing such calm and self-control you are fit to dwell among the Sunaparantans. Now it is time to do as you see fit.”

Then Ven. Punna, delighting and rejoicing in the Blessed One’s words, rising from his seat, bowed down to the Blessed One and left, keeping him to his right. Setting his dwelling in order and taking his robe and bowl, he set out for the Sunaparanta country and, after wandering stage by stage, he arrived there. There he lived. During that Rains retreat he established 500 male and 500 female lay followers in the practice, while he realized the three knowledges. At a later time, he attained total (final) Unbinding.

Washing my feet, I noticed

And in watching it flow from high

my heart was composed

Then taking a lamp, I entered the hut,

sat down on the bed.

And taking a pin, I pulled out the wick: