A sāmacera who breaks the five precepts such as vikāla bhojanā deserves punishment. When the above five offences are added to five offences such as vikālabhojana there are ten offences for which sāmaneras are punishable. These ten are refered to as ten punishments-penaces, because they are the principal among matters that deserve punishments. Sāmaceras are punishable for all other offences of the linganāsana. As there is no possible action such as declaring offences for the sāmaceras, punishment is the only means by which sīla (morality) can be preserved. Purity is not achieved merely by undertaking the precepts without paying penance. If an offence that causes defeat is committed, fresh taking of refuge is necessary. Until it is done, he is an immoral person. Paying penance is sufficient to gain purity after committing other offences. It is given in the commentaries that in order to achieve āyati sanvaraya (future discipline) offending sāmaceras must be made to undertake the precepts after paying penance.

When the bhikkhūs questioned as to what punishment must be meted out to sāmaceras who commit the five offences such as causing loss to bhikkhūs, Buddha decreed as follows “anujāmi bhikkhave avaranam kātum”, which means covering as a punishment. Covering here means, the offending sāmacera is not allowed to visit places where teacher/preceptor lives and he himself is not allowed to go to the place of his normal abode. The vinaya PāIi does not indicate for how long the punishment should last. Commentaries to the vinaya state that suitable penances such as carrying water, firewood or sand are required. Punishment to be terminated, after the sāmacera accepts the offence, penance paid and declaration made is meant here.

Sometimes a sāmacera may commit many offences deserving punishment. It will become difficult for the sāmacera to achieve purity if separate punishments are to be meted out for those offences. Therefore, a single punishment for all offences is to be meted out. It is suitable to refrain from getting useless work done, but to assign work such as sweeping etc. useful to the particular place. 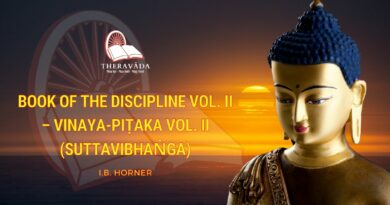